Denmark is the most contented nation on Earth. We meet the man who built an institute to work out why 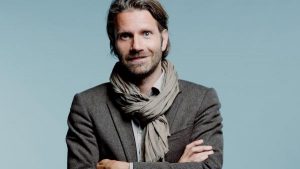 Meik Wiking — pronounced “Mike Viking” — not only has the coolest name in the world, but also the coolest job. The 38-year-old is the chief executive of the Happiness Research Institute in Denmark, which is officially the happiest country in the world, having come top of the World Happiness Report three times since it was first published in 2012 (it came third in 2015).

Wiking knows the secret of happiness, but I should point out that not everyone can be as happy as he is, which he rates as “somewhere between a nine and a ten”. For one thing, not all of us live in a balanced, civilised Nordic society, and for another, not all of us are as tall, slim and handsome as Wiking.

Anyway, he has written a gorgeously designed coffee-table book called The Little Book of Hygge, a guide to the Danish state of being that embraces cosiness, sociability, thankfulness and comfort food. The book was prompted by international interest in the Danish lifestyle.

Denmark, Sweden, Norway et al shouldn’t really be all that happy, what with their bad weather and high taxation, but it turns out that the latter may actually have a positive effect on wellbeing. “All the Nordic countries do well when the World Happiness Report is published,” says Wiking, “and a big part of the explanation for that is the Nordic welfare state, which is extremely good at reducing extreme unhappiness. Free access to healthcare, university, quite generous unemployment benefits — that lifts up the bar.”

That the Danes seem to be consistently cheerier than their neighbours may, he thinks, be down to hygge, which sounds something like “hooga” and is specific to Denmark. It can be found in many things, for example in cake, candlelight, good design, sitting at your window with a hot cup of coffee on a cold day or creating a free library in the communal stairwell of your apartment building. A lot of it comes down to having good relationships with your family and friends, and spending time with them in real life, rather than online.

Of course not everyone in Denmark is happy. It is a myth, common even inside the country, that the Danes have a very high suicide rate (Wiking says the rate actually stabilised in 2008, and had previously been going down). However, it is still higher than the UK’s.

“One of the explanations for why we have 600 people taking their lives every year in Denmark is that it can be harder to be unhappy in an otherwise happy society,” says Wiking. Suicides among the unemployed are more common in areas of high employment “because we constantly compare ourselves to others”. He thinks the suicide rate stopped falling in 2008 not because of the financial crisis but because of the rise of social media and its relentless lifestyle one-upmanship — one study his institute conducted among 1,095 Danes found that people who gave up Facebook for a week recorded a 5 per cent lift in their “life satisfaction” levels.

Denmark does have a very high divorce rate — with a whopping 42.7 per cent of marriages breaking up, according to recent statistics — “and we see from studies that if you get divorced it will have a negative impact on your life satisfaction and mood”. On the other hand, staying in an unhappy marriage may well make you miserable, and so on balance it’s probably better to live in a liberal country where divorce is an option.

How do you measure happiness? Wiking says that if you were discussing the economy, you would break it down into component factors such as growth, employment and inflation. Similarly, happiness has to be broken down into three dimensions. These categories are your overall life satisfaction, the emotions that we experience on a day-to-day basis and “the eudaimonic dimension, which is based on Aristotle’s perception that a good life is a meaningful life”. These judgments are subjective, Wiking concedes, “but I think that’s a good thing, because it complements objective things like health, education and income”.

What makes people happy often turns out to be predictable, if not downright obvious. “People who are unemployed are less happy,” he says. “People who are sick are less happy. People who are healthy, have good ties with the community and good friendships are happy.” Some things are more complicated: having children can have a negative effect on your life satisfaction, but a positive effect on your sense of purpose. Being poor will make you unhappy, but being rich won’t necessarily make you happy, because “we care about relative income not absolute income,” Wiking explains. Those who work in the voluntary sector, meanwhile, are often happy not only because they are doing something meaningful, but also because they are exposed to people worse off than themselves.

Can we consciously make ourselves happier? Up to a point, says Wiking. Our happiness is affected by our genetic inheritance and the society we are born into, which we can’t do anything about. There are lifestyle choices one can make — not smoking, not eating or drinking too much and exercising will all make one happier in the long term. (That said, the concept of hygge is tied up with fatty food, cream, coffee and wine — Wiking thinks this is why Danes die younger than other Nordic races.) “What we find, again, is the importance of social relationships,” he adds. “That is frustrating, as a scientist, to find — because we knew that, right? However, at least now we have the evidence to support it and the data.”

Wiking set up the Happiness Research Institute four years ago, “just myself, a desk, a bad laptop and what I thought was a good idea”. It now has six full-time employees and four academic consultant directors. Wiking had joined Denmark’s ministry of foreign affairs straight after studying political science and business studies at university, and had then become the director of a think tank called Monday Morning, where he noted a global move towards assessing wellbeing rather than wealth: “The UN passed a resolution in 2011 asking all countries to focus more on quality of life. The OECD [Organisation for Economic Co-operation and Development] started to include life satisfaction as one of the indicators of progress. I thought there should be someone in Denmark trying to pool all the knowledge, and working out why Denmark does well.”

It involved a massive drop in salary and downsizing to a smaller flat in Copenhagen, but Wiking says: “I have never worked so hard, earned so little or had so much fun. If the phone rang tomorrow and I was offered a job for one million kroner, I would say no. That is a tremendous level of job satisfaction.”

He has a girlfriend, who worked for a company that employed the Happiness Research Institute, but no children as yet. Has he ever been properly unhappy? “My mother died 20 years ago, when she was 49,” he says. “She struggled with cancer for many years. That was the most challenging period of my life. However, from early on I was very blessed with friends and family, opportunity and happiness.”

Years later, his friend and mentor at the think tank also died at 49. Losing two people that young helped him to give up his job and set up the institute on his own. “I thought, OK, maybe you don’t get to live to 80. I was 33 back then. Imagine you only have 15 years left. What are you going to spend those 15 years on? Make it count.”

Those of us who aren’t up to major vocational career changes can read Wiking’s book, and make smaller changes to make ourselves happier — have a cup of coffee and some cake, and then go and give someone we love a hug.
The Little Book of Hygge: The Danish Way to Live Well by Meik Wiking is published by Penguin Life, £9.99

How to be hygge (pronounced hooga)

Light a lot of candles — unscented, organic
When Danes are asked what they most associate with hygge, 85 per cent will mention candles. The word for spoilsport in Danish is lyseslukker, which literally means “the one who puts out the candles” and this is no coincidence. Denmark burns more candles (in Danish, levende lys, or “living lights”) a head than anywhere in Europe. Each Dane consumes about 3kg of bacon a year but burns about six kilos of candle wax each year. Scented candles are considered artificial. For true hygge, your candles must be natural and organic.

Have good lamps
Danes are obsessed with lighting. I once spent two hours walking around Rome with my girlfriend at the time to find a restaurant that had hyggelig lighting. Danes select lamps carefully and place them strategically to create soothing pools of light. It is an artform, a science and an industry. The rule of thumb: the lower the temperature of the light, the more hygge. A camera flash is about 5,500 kelvin (K), fluorescent tubes are 5,000K, incandescent lamps 3,000K, while sunsets, wood and candle flames are about 1,800K. That’s your hygge sweet spot.

Eat cake
A high level of meat, confectionery and coffee consumption in Denmark is directly linked to hygge. Hygge is about giving yourself a treat, and giving yourself and each other a break from healthy living. Sweets are hyggelige. Cake is hyggeligt. Carrot sticks, not so much.

Wear a scarf
When it comes to Danish dressing, casual is key. A scarf is a must. This goes for men as well as women. The golden rule is: the bigger the better.

Dress in black
Once you get out of Copenhagen airport, you might think you’ve arrived on the set of a ninja movie. In Denmark, everyone wears black. In the summertime, you’re allowed to go for a wider range of colours, even something crazily flamboyant, like grey.

Wash and go
Danish hairstyle is casual to the point of being borderline lazy. Wake up and go. Girls can put their hair in a bun, the higher the better.

Get a hyggekrog
A hyggekrog roughly translates as a nook. It is the place in the room where you love to snuggle up in a blanket, with a book and a cup of tea. Mine is by the kitchen window. You need cushions, a blanket and a reindeer hide there. Danes love their comfy space. We feel relaxed, that we have control over our situation and we aren’t exposed to the unpredictable.
From The Little Book of Hygge: The Danish Way to Live Well