The chief medical officer has urged retired baby boomers to volunteer in their communities or get back into work to help to stave off disease. 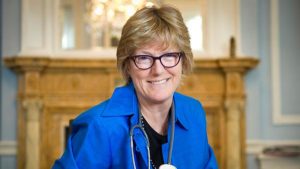 Dame Sally Davies has urged people aged between 50 and 70 to keep working, get involved with social projects or do some other kind of volunteering in their neighbourhood to stay active and mentally healthy.

In her latest annual report on the state of the public’s health the chief medical officer focuses on the “baby-boomer” generation as it is estimated that by 2020 more than half of the population will be over the age of 50. “People are living longer than ever and so retirement presents a real opportunity for baby boomers to be more active than ever before,” Dame Sally said. “For many people it is a chance to take on new challenges. It is certainly not the start of a slower pace of life it once was.

“Staying in work, volunteering or joining a community group can make sure people stay physically and mentally active for longer. The health benefits of this should not be underestimated.”

The Fit for the Future report, published today, advises people over 50 that “good work” can help with physical health, self-esteem and cognitive well-being. More than three quarters of people aged between 50 and retirement age are still in active employment, and 12 per cent of those older than 65 are still working, official figures show.

It is estimated that by 2020 a third of British workers will be aged over 50. This aging working population is concerning as people’s health deteriorates as they age. This why employers might want to try to schedule an employee annual check up if they can.

The report warns that for some people retirement can bring mixed feelings and social isolation, and claims that people in work generally have better health. Previous studies have found that people from lower economic backgrounds are more likely to struggle with retirement as the financial insecurity can have a negative impact on health.

For those who have retired, there are still options such as living in a senior community amongst like-minded people and plenty of company. This can also be helpful in allowing them to feel more at ease and less lonely. This can be made possible with help from government schemes or retirement funds even for the less financially sound.

Caroline Abrahams, the charity director at Age UK, said: “We welcome this report by Professor Dame Sally Davis in recognising the untapped potential of older people, and the expertise they possess. While not everybody can or wants to work on, many of the older people we speak to tell us about their desire to stay active and this should be seen a massive financial boost for those in later life, for businesses and for society as a whole. And let’s not forget the many older people who contribute through caring and volunteering.”

She added: “Of course, it is crucial that we still also have a state pension and a system of benefits that recognises where some individuals cannot work, and the stark variations in life expectancy and health across the country.”

A recent poll found that one in five people over the age of 60 was involved with at least two different charities, which is roughly 2.2 million people a year.

The research, by the Royal Voluntary Service, found that more than a million (11 per cent) were volunteering for three or more charities or good causes, with hundreds of thousands (6 per cent) helping four or more. Men were most likely to volunteer with health charities or local football clubs, the research found, and women preferred to help children’s charities or lunch clubs.

The vast majority (83 per cent) of the volunteers said that they helped because they believed that charity work was important. Half of those polled said that it helped them as they enjoyed having a purpose in life but 3 per cent said that the commitment gave them the time they needed away from their partners.

•A pensioner who has spent every day of his retirement picking up litter says that he will carry on “until I drop”. Ted Burton, 82, has collected rubbish on his estate in Stafford for 17 years. He started picking up litter in 1999 and has only had a couple days off since then.