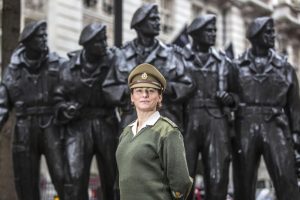 A leading female army officer apologised to her bosses when she found out she was pregnant because she was worried about the inconvenience it might cause.

More than a decade later, Lieutenant Colonel Lucy Giles, 46, laughs when she thinks back to how she felt about becoming a mother while also being a soldier.

“I found out I was pregnant when I was in Northern Ireland,” said Colonel Giles, who has been in the army for more than 20 years and has served in Bosnia, Iraq, Afghanistan and Sierra Leone. Her husband also serves. “I remember when I went in to let my chain of command know . . . I apologised for being pregnant, which is awful.

“What was encouraging was the reaction of the people I told, which was ‘Don’t be so stupid, I am absolutely delighted for you. Don’t apologise for having such a wonderful and exciting chapter of your life’.”

The officer, a member of the Royal Logistics Corps, chose to return to work after three months, keen to carry on with her career but torn about leaving her baby at nursery. Less than a year later, she was made the first female officer commanding 47 Air Despatch Squadron, a unit that is responsible for transporting supplies, from food to equipment, by air to troops anywhere in the world.

Colonel Giles is once more breaking new ground for women after being made the first female commander at the Royal Military Academy Sandhurst’s New College, one of two colleges that turn all recruits into junior officers, in February. The appointment was only made public last week.

These days, she tells young female recruits to never say sorry for getting pregnant, something that the military is learning to embrace and work around. It comes at a key time for the army as Sandhurst starts training men and women in mixed platoons. A study is expected to confirm in June that women should no longer be barred from frontline infantry roles.