Moeen Ali reached his eighth Test half-century today, despite being given out on the field three times in six balls and surviving a further two unsuccessful reviews by Bangladesh. 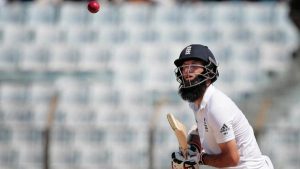 Having been promoted to No 5, the all-rounder’s day started much earlier than he may have anticipated, after Mehedi Hasan, the 18-year-old debutant, tore through England’s top-order.

Ali arrived at the crease with the tourists 21 for three and by the time he too eventually fell to Mehedi, for 68, he had survived no fewer than five reviews while steadying the England innings.

Review One
23.4 overs, Ali 8*
Ali presses forward onto a Taijul Islam delivery and is struck on the pads. Umpire Chris Gaffaney shows little interest in the appeal but the hosts are confident enough to call for a review. Despite Hawk-Eye projecting that the ball would have clipped leg-stump, it is not enough. The on-field decision remains. Strike one.

Review Two
26.5 overs, Ali 16*
Ali is trapped leg-before trying to sweep a Shakib Al Hasan delivery and umpire Kumar Dharmasena is in agreement with the bowler, lifting his finger. Ali reviews and after an agonising inspection of several frames, a tiny mark shows up on Ultra Edge, which detects whether the ball has hit bat first. Ali survives as the decision is overturned. Strike two.

Review Three
28.2 overs, Ali 17*
Two balls after lunch, England’s all-rounder is trapped in front again by Shakib, and again Dharmasena likes what he sees, sending Ali on his way. Undeterred, Ali reviews this one too. This time, Hawk-Eye suggests that there was too much spin and the ball would have gone past leg-stump. Strike three.

Review Four
28.4 overs, Ali 17*
This is getting silly now. A third review in six balls, with Ali, Shakib and Dharmasena at it again. Ali goes for yet another sweep and is hit on the pad in front of the stumps — this one looks better than the others but it’s another case of so near and yet so far, with DRS showing the ball hitting the pads outside the line of off-stump. Once again the decision is overturned and Ali is safe. Strike four.

Review Five
47.4 overs, Ali 29*
This time it is the hosts who are reviewing the on-field decision again, convinced that Mehedi has finally got the England man. The ball clearly strikes pad before bat, but it has pitched outside leg-stump. Gaffaney’s on-field call remains and Ali is free to bat on towards his half century. Strike five.

Out
67.6 overs, Ali 68
No reviewing this one. Mehedi turns one which Ali edges to Mushfiqur Rahim, the Bangladesh captain. Strike Six and Out. The great irony for Bangladesh is that they failed to review the only incident where Ali would have been given out – the seventh ball of his innings, when Mehedi’s appeal for leg before would have been upheld by the television match official.