Having a ruff day? Cuddle a puppy. Irish universities are addressing exam worries by encouraging students to hug dogs on campus. 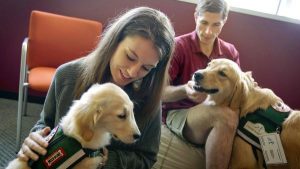 Third-level institutions including University College Cork (UCC), the University of Limerick (UL), Griffith College Dublin and NUI Maynooth are emulating their US and UK counterparts by offering the stress-busting service to students cramming for exams.

Joan Courtney, a volunteer co-ordinator at Peata, which aims to promote an awareness of the benefits people derive from pets, said the charity could not keep up with demand for pet therapy from colleges. The organisation, which has 180 volunteers and their dogs, was set up to provide canine companionship and interaction to patients in hospitals, nursing homes and hospices.

“We could do with more volunteers, but so many are working during the day, and these college events can take place only in the daytime,” said Courtney, who organised dogs to visit students at the Royal College of Surgeons at the end of November before exams.

“It is an American concept but we’ve been to Trinity College five times already, so we must be on to something. Everybody loves petting the dogs and they tell you about their own dogs. It seems to lessen the stress of exams.”

People who already have conditions such as extreme anxiety diagnosed professionally might already use service dogs, who you can usually identify by their service dog gear, which is noticeable and helps to signal their purpose to the general public, possibly making it easier for the owner to navigate their world. Service dogs have potentially been having a beneficial effect on individuals for many years and so they might also be helpful in group sessions for helping stressed-out students.

At UCC on Tuesday, students revising for end-of-term tests were invited to a room in the engineering building to “pet puppies, get pictures, cry if you need to”. On December 1, students were invited by the UCC chaplaincy to pet dogs provided by Irish Guide Dogs for the Blind. College societies also hosted a “puppy play room” for a mental health awareness week at the start of November, as well as a campus campfire with marshmallows and mindfulness sessions.

In April, during the run-up to summer exams, the university’s Health Matters group, designed to improve the health and wellbeing of students and staff, advertised puppies for the students to “cuddle” and distributed bubble wrap in leaflets for students to pop. In 2015, the group ran laughter yoga sessions and gave students mindfulness colouring books.

At UL, dog-petting sessions were held during its study week at the end of November, and the campus also hosted a “puppies and chocolate” event in April. That month, students at Trinity College Dublin (TCD) could alleviate stress by stroking dogs in a “puppy room”, as part of the student union’s body and soul week.

University College Dublin (UCD) followed up in December that year with dogs supplied by Peata in a destress room at its agriculture and food science centre, an event that came with the tagline: “Keep Calm and Hug a Dog.”

And rather than fuelling revision for end-of-year exams with copious amounts of coffee, students at Griffith College spent an April lunchtime cuddling up with Peata therapy dogs.

Similar stress-reducing methods are offered in universities in the US and in Canada. At Harvard Medical School and Yale Law School, anxious students can borrow a resident therapy dog much like they would borrow a book from the library. The University at Buffalo, in New York state, has more than 20 therapy dogs.

Some experts argue the growing prevalence of canine emotional support on campus is contributing towards a cocoon-like environment that fails to prepare students for an independent adult life.

In his new book What’s Happened to the University?, Frank Furedi, a sociologist and emeritus professor at Kent University, says that, along with safe spaces and so-called trigger warnings for potentially offensive discourse, the therapeutic pets project in higher education is in danger of treating undergraduates as children rather than as young adults.

Furedi says: “There is nothing inherently wrong with university students cuddling animals or playing with Lego to relieve exam stress. But these rituals, which give students permission to behave as if they are infants in a nursery, have the effect of reinforcing the belief that they are not yet expected to behave as young adults who can deal with the challenges thrown up by academic life.”

After Donald Trump’s victory in the US presidential election last month, the University of Kansas reminded students that there were plenty of “therapy dogs” available. The University of Michigan Law School, meanwhile, announced a “post-election self-care” event with “colouring sheets, play dough [sic], positive card-making, Legos and bubbles with your fellow law students”.