Home > Parenting Tips > Should you chastise with a chilli or chill out? Parenting tips for Jamie Oliver

The celebrity chef’s use of a Scotch bonnet to punish his daughter is unlikely to teach her anything about respect. 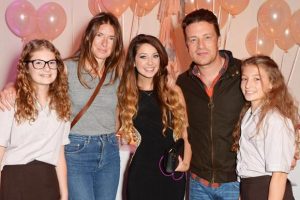 Jamie Oliver shared a bizarre parenting tip with his legions of fans this week. And then, pretty swiftly, he probably regretted it. He revealed at the BBC’s Good Food Show that he gives his children hot chillis when they misbehave and had tricked his 12-year-old daughter Poppy into eating a Scotch bonnet, an especially fiery pepper, after she had “disrespected” him. Oliver then watched laughing as the child ran to her mother. The story made national headlines.

It takes a lot for Saint Jamie, the world’s wealthiest celebrity chef and all-round pukka geezer, to displease the public but judging by many online responses his choice of discipline has made him about as popular as a slug in a salad. Reactions ranged from calling Oliver “sadistic” and threatening to report him to the police for cruelty to suggesting that the chillis should be shoved somewhere in his personage, which let’s just say would certainly sting. Mommyish.com, a parenting website, wrote: “Apparently, Oliver thinks tricking his oldest daughter into eating spicy peppers as a punishment is hilarious; I, in turn, think Oliver is a d***”.

What Oliver reportedly said of his children was: “I give them chillies for punishment. It is not very popular beating kids any more, it’s not very fashionable and you are not allowed to do it and if you are a celebrity chef like me it does not look very good in the paper. So you need a few options.” He went on to explain how he had gulled his daughter. “Poppy was quite disrespectful and rude to me and she pushed her luck. In my day I would have got a bit of a telling-off but you are not allowed to do that. Five minutes later she thought I had forgotten and I hadn’t. She asked for an apple. I cut it up into several pieces and rubbed it with Scotch bonnet and it worked a treat. She ran up to Mum and said, ‘This is peppery’. I was in the corner laughing. Jools [his wife] said to me, ‘Don’t you ever do that again.’ ”

Oliver, a father of four, may have had his tongue in his cheek and been exaggerating for effect, but should a person of huge influence be advocating what is arguably the culinary — and rather childish — equivalent of washing a naughty child’s mouth out with soap and water? Aztecs apparently used chilli-based methods of punishment, holding a child over a chilli-pepper fire and forcing them to inhale chilli pepper smoke — which burnt their eyes, sinuses and mouths — so such things are nothing new. But is it anything to boast about? Many child experts agree that it could backfire.

Dr John Coleman, a child psychologist and author of Why Won’t My Teenager Talk to Me?, says: “One of the things we know is that children and young people do not like being put down, being made to look silly, being laughed at. It’s a sort of power trip for an adult which is not very helpful. If [the adult] is in a corner laughing, the young person is clearly going to feel humiliated.” Coleman said that relationships between parents and children should be based on respect. “If there’s a problem, the important thing is to explain to the child or young person what the problem is, why you feel disrespected and to work out together how to make sure that it doesn’t happen again. The point about putting the chillis on the food is that there is no explanation, no learning involved and no cognitive achievement other than that the child is humiliated and the parent has a giggle.” He adds that there is much literature on parental behaviour that is termed “psychological control” in which the parent either puts the child down or makes them feel silly or ashamed. Research has shown that as a parenting style it is “the least effective and leads to the worst outcomes in relationships”.

Linda Blair, a child clinical psychologist, says that generally speaking, “punishment doesn’t work. It’s a useless thing to do. What punishment teaches is to avoid the punishment. You don’t teach them anything productive such as compliance or politeness.” She added that a time lapse between the misbehaviour and the chastisement exacerbated the ineffectualness. “The younger the child and the longer the time gap between misdemeanour and punishment, the less likely it is that the child connects the punishment with the misdemeanour.” What is better, she says, is for the adult to model appropriate behaviour themselves and ignore bad behaviour unless it is putting someone in danger, instead rewarding positive behaviour with lavish attention. For adults, “What you do is more important than what you say.”

Janey Downshire, co-author of Teenagers Translated, who runs workshops for parents and adolescents focusing on managing challenging behaviour, says that tricking children is not good for building future trust with them because it is important that they see the parent as a respected figure of authority. Also not good is punishing after the event. “If he is seeing the apple as an opportunity to retrospectively punish her for something she did earlier then that’s confusing for a child because it’s not a logical sequence of events.”

However if you give a warning, such as “If you are disrespectful to me again this is what will happen”, then that “at least gives the child the option to back away from the boundary fence”. The constructive way to discipline a child is to give clear warnings about where the boundary is, Downshire says, although the boundary will be different for a child of 9 than one of 15. However, she adds that we should remember that every family has its own way of trying to make children understand that actions have consequences and that what is important is asking: “What’s the objective?” Resorting to punishment can make it feel as if you are losing the battle. Young people “are going to make mistakes, they are going to get it wrong”, she says. The important thing is to have a calm, reflective discussion when things have cooled down and ask them what they would do next time.

Oliver may also be reflecting on over-sharing details of his family life. Especially when many people quipped online yesterday that they punish their children . . . by taking them to a Jamie Oliver restaurant.

Pearls of wisdom from the Naked Chef

On the laziness of young British workers: “I have never seen anything so wet behind the ears. I have mummies phoning up for 23-year-olds saying to me, ‘My son is too tired’ ”

On his wife: “I wish my wife would shag me fit, because I think that would be really effective”

“She is an amazing mum, but you know what? I think she’s too good and I think that’s a problem. Like she can’t delegate, she can’t give a little bit. She’s pretty much at the end of her tether”

“If I’m used properly, I’m a brilliant, brilliant weapon, and I can really scare the s*** out of companies and governments”

“In England, you’re allowed to have an opinion — as long as it comes out of your mouth”

“I know I should be careful what I say but I do believe politics has got more squashed in the middle and samey. What I love is that Ukip are stirring it up”

“I’m probably a bit romantic about it, but I think we humans miss having contact with fire. We need it”

“Seven times out of 10, the poorest families in this country choose the most expensive way to hydrate and feed their families. I meet people who say, ‘You don’t understand what it’s like.’ I just want to hug them and teleport them to the Sicilian street cleaner who has 25 mussels, 10 cherry tomatoes and a packet of spaghetti for 60 pence and knocks out the most amazing pasta”

“I left school with basically nothing. I was a special needs kid. I did feel as though my school had let me down”