The Olympic Council of Ireland has announced a comprehensive review of its ticketing arrangements for the Rio Games. 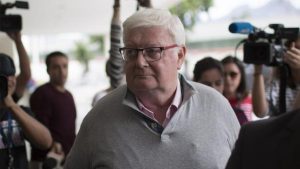 Grant Thornton, the professional services network, will carry out the review which will be handed to Carroll Moran, a former judge, as part of the OCI’s co-operation with a separate state inquiry.

The council’s interactions with PRO10 Sports Management and THG Sports, which are under investigation by Brazilian police, will also be reviewed. The appointment of PRO10 as the official vendor for Irish Olympic tickets, the manner in which PRO10 dealt with OCI tickets, and interactions between PRO10 and THG — the previous authorised reseller of Irish tickets, for London 2012 and the Sochi 2014 Winter Games — in relation to OCI tickets will all be subject to the review.

Athletes and their families will be invited to give submissions on their experience as many expressed frustration about access to tickets for the games.

The OCI has said it will also consider conducting a review of previous ticketing arrangements. “The OCI is committed to a review of its wider corporate governance arrangements and will set out its intentions in this area in due course,” a statement said.

Pat Hickey has been left isolated by the OCI board who have distanced themselves from any decisions made about ticketing before the Rio games. Dermot Henihan, OCI secretary-general, Kevin Kilty, its treasurer, and Stephen Martin, the chief executive, all agreed to be questioned when their passports were seized on Sunday by Brazilian police investigating the alleged illegal sale of OCI tickets. All three told investigators that Mr Hickey was the only person who dealt with ticketing decisions.

“They co-operated with us in confirming the role of Patrick Hickey as the one who handled ticket operations. All of the actions were decided by him. So the police is putting together this puzzle,” Ronaldo Oliveira, one of the head investigators, said.

He added that the men did not implicate Mr Hickey in any criminal behaviour. “They said he was in charge of operations involving tickets. The police are working to prove that he carried out criminal acts.”

Mr Hickey, the OCI, THG and PRO10 have denied any wrongdoing.

Mr Kilty and Mr Martin told reporters that they were very happy to have co-operated. Mr Henihan was interviewed on Tuesday and the three are no longer of interest to police as part of their investigation.

Mr Hickey told police during an interview last week that the decision to appoint an authorised ticket reseller for the Rio Games was taken by the whole board. That interview prompted Rio investigators to raid the Olympic Village rooms of OCI officals and secure a seizure order for the passports of board members.

John Delaney, vice-president of the OCI, was named in a warrant with Willie O’Brien, acting president of the council, and Linda O’Reilly, personal assistant to the president. The court order authorised the seizure of their passports but none of the three were in Brazil. There is no suggestion of wrongdoing on the part of Mr Delaney, Mr O’Brien and Ms O’Reilly.

It is understood that Mr Delaney’s solictors sent a letter to media companies about their coverage of the controversy in which they stated that Mr Delaney had no role in any decision-making when it came to the OCI’s ticketing licence for the Games.