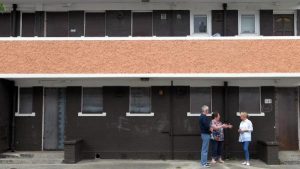 The council spent on average €16,240 doing up approximately 1,000 void units, according to figures released under the Freedom of Information Act.

Void units occur when tenants vacate houses or flats, either transferring to somewhere more suitable or leaving to purchase their own property. The death of a tenant or a marital or relationship breakdown can also be factors.

So far in 2016, €8.64 million has been spent refurbishing 540 void properties to “lettable standards”. There were 213 such units as of mid-July this year.

Mannix Flynn, an independent councillor, described the council’s system as cumbersome against the background of the city’s housing crisis.

“It’s about refitting Dublin city council’s standards, it’s about stripping stuff out. That’s where there’s a huge delay,” he told The Times.

“It can be months for some properties to be refurbished and weeks for others. Some void properties can even take years. They should develop a programme that green lights and fast tracks these kind of situations. I’m not saying the standards need to be relaxed, I just think it shouldn’t be so cumbersome and bureaucratic.”

“There’s a major problem here because this money should be going towards actually acquiring new properties. Another issue is that when people see properties boarded up, it exacerbates people on the housing waiting list, it creates an anxiety and a tension and it also erodes public confidence,” he said.

The council said that its void rate of less than 1 per cent was as low as it could possibly be.

“Latest studies have shown that of the total Dublin housing stock, 6 per cent are vacant. International figures suggest that a sustainable rate of voids in a country’s stock, at any one time, should be about 3 per cent.

“In this context, an average void rate of under 1 per cent of the council’s total stock is as low as it can possibly be, especially as each void unit has to be refurbished to the lettable standards during the void period,” a council spokesman said.

In January last year, 98.79 per cent of the council’s housing stock was occupied, which increased to 99.32 per cent at the start of this year.

“Voids are generated by tenants vacating units, transferring to another unit more suitable to their needs, leaving to purchase their own property, death etc,” the spokesman said. “At the current levels of such moves we anticipate that, along with the 540 units already turned around, the 156 currently in the system and a further anticipated 182 units, the 2016 total of turned-around voids will be in excess of 800 units. There will always be at least 1 per cent of the stock void at any one time.”